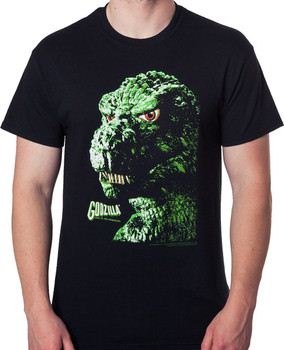 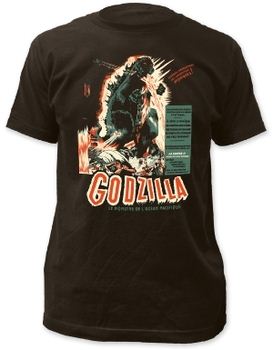 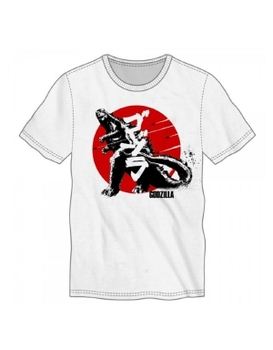 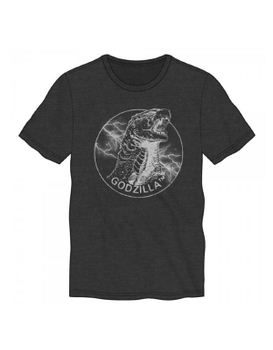 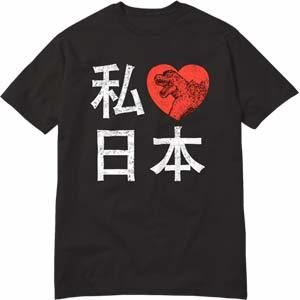 If you are interested in the Japanese culture, you know already how Godzilla is famous and popular here. This T-shirt says “I (Godzilla) Japan” in Japanese kanji What a great combo, with a great illustration of the best monster from Japan within the heart. Wearing this T-shirt is one the best way to show how your love is as big as Godzilla’s love is for Japan. Illustration by Adam Works.
Buy it on jbox.com
$19.95
6 Godzilla vs Cthulhu

When the world ends, the fight begins, in this epic t-shirt that depicts Cthulhu fighting Godzilla to determine the fate of the planet. The Lovecraftian elder lord is shown in a classic fight with the savior (and sometimes devastator) or Japan, Godzilla. The T-shirt reads “Godzilla vs Cthulhu” in Japanese. A great shirt to show your fandom of either Cthulhu lore or the king of monsters, Godzilla. Illustration by Adam Works.
Buy it on jbox.com
$19.95
7 Godzilla Tower Grab T-Shirt 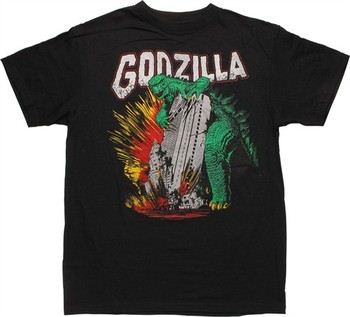 Godzilla Tower Grab T-Shirt This is an officially licensed Godzilla T-Shirt.
Buy it on Redbubble.com
$19.88
8 Godzilla Big in Japan T-Shirt 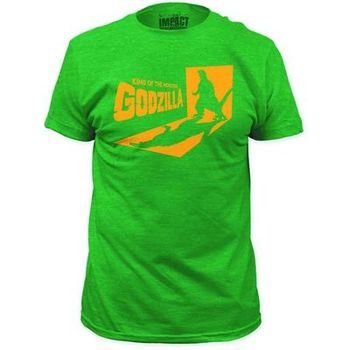 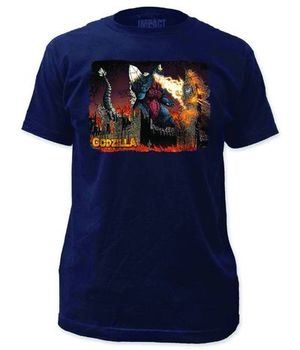 Godzilla Air Strike T Shirt Sheer Godzilla swats away some pesky helicopters on this cool Godzilla t shirt! The Godzilla Air Strike T Shirt Sheer is light blue with a soft feel and a trim fit. It features the name of the famous monster, Godzilla, in red letters above an image of the green giant battling the military in front of a cityscape. Wear it to see the latest Godzilla movie!.
Buy it on Redbubble.com
$20.88
12 Godzilla Silhouette Gojira Katakana T-Shirt Sheer 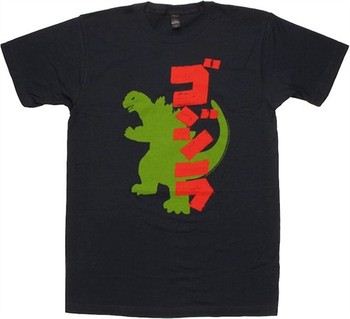 Godzilla Silhouette T Shirt Sheer A green silhouette of Godzilla highlights this trim-fit Godzilla t shirt that also features Japanese characters. The Godzilla Silhouette T Shirt Sheer is Navy blue with a distressed print, and has a soft, pre-washed feel. The giant lizard-monster Godzilla appears to be turning toward the front of the t shirt, behind a bright red set of Japanese characters..
Buy it on Redbubble.com
$21.88
13 Godzilla Kaiju Gojira Katakana T-Shirt Sheer “Godzilla Kaiju T Shirt Sheer The word “”Kaiju”” means “”strange beast”” or “”monster”” in Japanese, and this Godzilla t shirt features the biggest, baddest kaiju of all! The Godzilla Kaiju T Shirt Sheer is black wash with a distressed print. This Godzilla t shirt features a tailored fit and a soft, pre-washed feel. It features a roaring green Godzilla on the front with the word “”Kaiju.”””.
Buy it on Redbubble.com
$21.88
14 Godzilla Gojira Poster Katakana T-Shirt “Godzilla Street T Shirt Godzilla has headed for the streets and he is coming your way, blowing fire at anything he sees! The King of the Monsters is now king of the comic books with this classic t-shirt. Printed on a black tee, is the first 1970’s issue of the Marvel comic series “”Godzilla, King of the Monsters #1″” from 1977. The artwork and design shows every detail of that comic book cover and provides this t-shirt with a retro style. Whether you love the Godzilla comic books or the movies, this t-shirt is a great find!”.
Buy it on Redbubble.com
$25.00
16 Godzilla Greetings from Monster Island T-Shirt Sheer 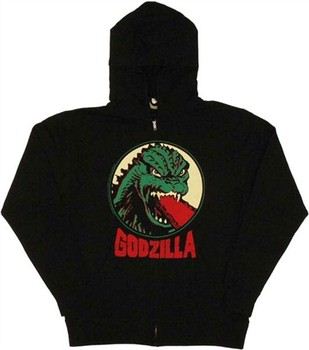 “Godzilla Face Hoodie Breathe fire with this colorful, kitschy Godzilla hoodie! The Godzilla Face Hoodie is black with a distressed print around a full length zipper. Godzilla blasts a ball of fire out from his giant mouth, an appropriate metaphor for this extra warm and comfortable hooded sweatshirt. The giant green lizard is wrapped within a green and yellow circle, with the word “”Godzilla”” underneath in bright red letters. You’ll look “”hot”” when your friends see you wearing this 1950s-style Godzilla hoodie!”.
Buy it on Redbubble.com
$49.99
18 Godzilla Oh No There Goes Tokyo T-Shirt Sheer 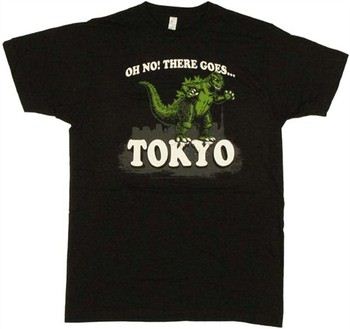 “Godzilla Tokyo T Shirt Sheer Get monsters of laughs when you show your friends your whimsical Godzilla side with this fun t-shirt. On a black tee, we see the iconic Godzilla monster ready to go into attack against Tokyo. You wonder how much more attacks from Godzilla they can take, well this may be their last stand. With “”Uh oh, there goes Tokyo”” printed in white, you’ll be waiting to see what Godzilla’s next move will be!”.
Buy it on Redbubble.com
$19.88
19 I Godzilla Tokyo T-Shirt Sheer “Godzilla Tokyo T Shirt Sheer Pay tribute to where all the Godzilla frenzies started with this “”I love Tokyo”” t-shirt. This clever t-shirt displays the red silhouette of Godzilla, in place of the word “”love”” of this saying. Tokyo and your style will never be the same when you show off this whimsical Godzilla t-shirt.”.
Buy it on Redbubble.com
$4.90
20 Godzilla Gojira T-Shirt 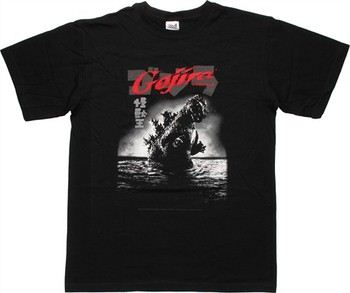 “Godzilla Gojira T-Shirt Wear the shirt of a movie classic with this Godzilla black tee. Decorated with one of the movie posters that show Godzilla going in out of the sea, coming to destroy anything that stands in his way. The vintage black and white movie poster is a true iconic look, with the Japanese letters and the “”Gojira”” printed in red over it. If you love those old classic movie of Godzilla, then this is a must have t-shirt.”.
Buy it on Redbubble.com
$19.88
21 Godzilla Face Black T-Shirt Godzilla Face T-Shirt Get your thrills and chills with this Godzilla face t-shirt. Godzilla roars off your shirt and would get anyone running for their lives when they see the detail of this t-shirt. The red eyed, green gigantic monster has a presence that is shocking and iconic! The quality and detail of this Godzilla t-shirt will have you stomping your way into style!.
Buy it on Redbubble.com
$19.88
22 Godzilla World Destruction Tour T-Shirt 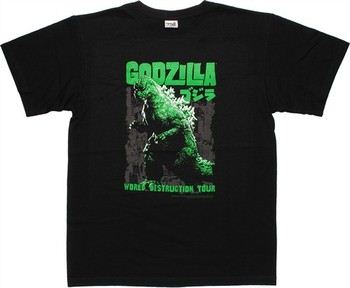 Godzilla Destruction Tour T-Shirt Go into attack mode when you join in on Godzilla’s World Destruction Tour! Godzilla has certainly made his rounds throughout the world, with terror and destruction that began back in 1954 where he made his first appearance. Kaiju a Japanese giant monster as seen here on the front of this t-shirt, the classic and unforgettable iconic creature. This picture of Godzilla is a great vintage wear that even has him in classic green color. On the back of the shirt, a list of all the places Godzilla has ‘Destroyed’ from Tokyo to New York, to Devils Island, which shows us that one thing is for sure, you’ll be a large force to be reckoned with when wearing a Godzilla t-shirt..
Buy it on Redbubble.com
$19.88
23 Godzilla Incredible Unstoppable Titan of Terror T-Shirt Godzilla King T-Shirt This Godzilla t-shirt is a real scream! Printed on a black tee, Godzilla stomps his way through any city that gets in his way, and he doesn’t care who he steps on. The vintage t-shirt shows the classic Godzilla as he appeared in the movies back in 1954 through the 70’s. With Godzilla printed in white below the black and white image of Godzilla, you’ll be screaming for everyone to get out of your way!.
Buy it on Redbubble.com
$19.88
25 Godzilla Tanks Green T-Shirt Sheer Godzilla Tanks T-Shirt Sheer It’s going to take more than an army to destroy the King of the Monsters! This fight-able Godzilla t-shirt can withstand anything that goes against it, even a Tokyo army. Printed on a green tee, the image of Godzilla is seen here, shooting fire out of his mouth that also spells out the Godzilla name. With little tanks, army men, airplanes and helicopters all trying to shoot Godzilla down, you’ll know one thing for sure, you’ll style will remain strong..
Buy it on Redbubble.com
$19.88
26 Godzilla World Destruction Tour T-Shirt Sheer Godzilla Destruction Tour T-Shirt Sheer Go into attack mode when you join in on Godzilla’s World Destruction Tour! Godzilla has certainly made his rounds throughout the world, with terror and destruction that began back in 1954 where he made his first appearance. Kaiju a Japanese giant monster as seen here on the front of this t-shirt, the classic and unforgettable iconic creature. This picture of Godzilla is a great vintage wear that is seen here in with a worn distressed look. On the back of the shirt, a list of all the places Godzilla has conquered from Tokyo to New York, to Devils Island, which shows us that one thing is for sure, you’ll be a large force to be reckoned with when wearing a Godzilla sheer t-shirt..
Buy it on Redbubble.com
$19.88
27 Godzilla Mirrored T-Shirt Godzilla Mirrored T-Shirt It’s two times the trouble and two times the action with this amazing Godzilla t-shirt. It’s like looking into a mirror….a mirror of Godzillas! This red decorative t-shirt shows the King of the Monsters true to form, in green classic color and detailed graphics. As Godzilla is printed twice on the front, Godzilla gets a glimps of himself. The t-shirt is also designed with black leaves and plants that grow across the shirt, while Godzilla’s name is printed in bold letters with the Japanese letters going down the front..
Buy it on Redbubble.com
$22.49
28 Godzilla vs Mechagodzilla T-Shirt “Godzilla Mechagodzilla T-Shirt It’s Godzilla vs. Mechagodzilla….a epic fight between two of the most gigantic monsters! This black t-shirt shows the picture of the 1974 Japanese movie “”Godzilla Vs. MechaGodzilla””. When a robotic Godzilla (MechaGodzilla) is made to destroy Japan, and the true Godzilla may not be powerful enough to destroy it. Full of thrilling Godzilla suspense and monster fighting. The graphic pictures of the two monster about to collide with bright colors and explosions all around them. A shirt that any retro Godzilla fan would love to wear.”.
Buy it on Redbubble.com
$19.88
29 Godzilla French Black T-Shirt Sheer Godzilla French T-Shirt Sheer Even the French are not safe from the clutches of the King of the Monsters! This great French Godzilla movie poster t-shirt, shows off how big Godzilla is all around the word. The great design and vintage artwork of the French Poster is a great fashion that any Godzilla fan will look monstrous in. With only French being written on this shirt, you can see that in no matter what language, Godzilla is the most feared fiery monster around..
Buy it on Redbubble.com
$19.88
30 Godzilla Close Up Face Sun T-Shirt Sheer Godzilla Face T-Shirt Sheer Looking like the Japanese sun is radiating behind the face of Godzilla, you will feel like he will roar right off your shirt. The white sheer tee is a classic look, with the vintage Godzilla in green scales, showing off his better side! With bright red stripes dashing across the shirt, the Godzilla style stands out. This shirt is definitely the King of the Monster shirts!.
Buy it on Redbubble.com
$25.00
31 Godzilla Face White on Black T-Shirt Godzilla Face T-Shirt Feel the power and roar of Godzilla, with this monster of a t-shirt. Godzilla has the face only a mother could love….but who doesn’t love the iconic creature that has a way of making everyone scream and run. The black and white t-shirt is decorated with the large face of Godzilla, showing off large sharp teeth as he roars! With Godzilla’s name printed below his image, and the Japanese letters for Godzilla printed on the side, you’ll be wearing a vintage Godzilla style shirt!.
Buy it on Redbubble.com
$19.88