Check out our discoveries of the most awesome Alien T-Shirts below. We simply find and round up all Alien T-Shirts scattered around the Internet that we think are cool so that you don't have to. If you find these Alien T-Shirts really cool, do not hesitate to share with your friends.
* The list below contains affiliate links, which means if you make a purchase after clicking on a link below we may earn a small commission at no extra cost to you.
1 Giger Alien Shirt 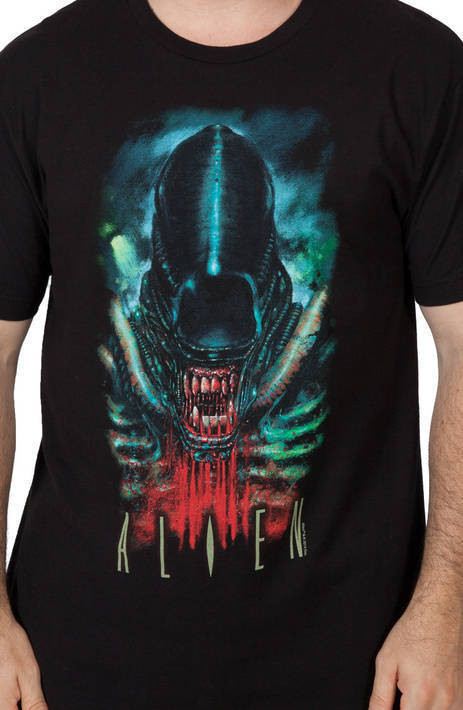 This Alien shirt shows the blood-thirsty creature from the 1979 sci-fi classic. The creature was created by H.R. Giger, and was a design that won Giger an Academy Award for Visual Effects. Every fan of Alien deserves a t shirt, even if you are secretly a robot. Show your love for Alien with this Giger shirt. 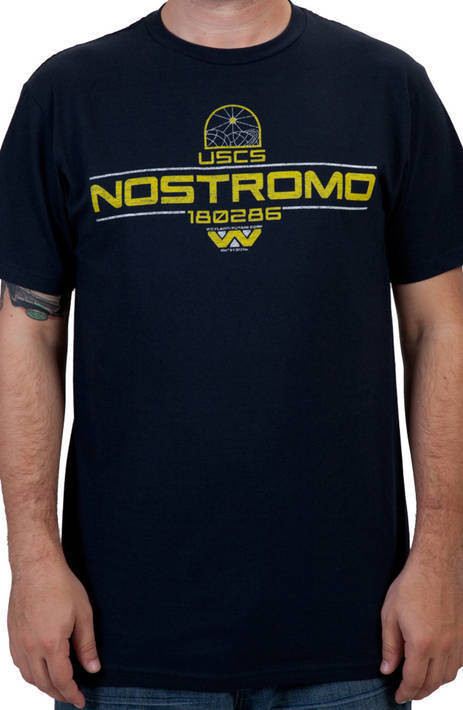 This Alien shirt shows a logo for Nostromo, a spaceship owned by Weyland-Yutani. On a return trip to Earth, the crew of Nostromo encounter aggressive extraterrestrials. Chest-popping, flame-throwing fun ensues. This Nostromo shirt is perfect for any fan of the classic sci-fi film, Alien. 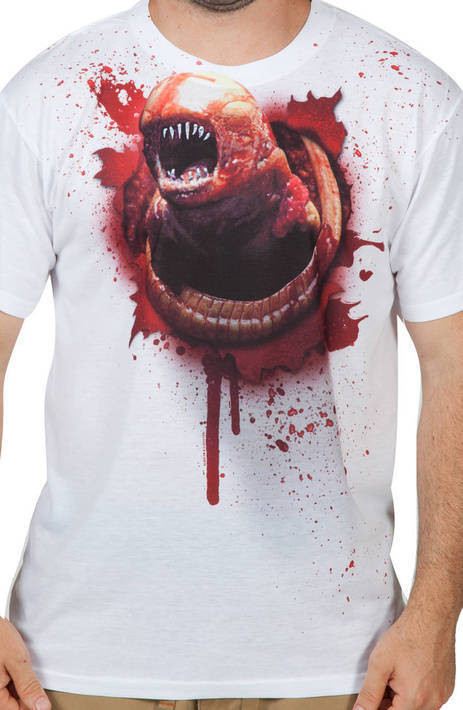 Without going through the trouble of having a Facehugger insert a proboscis down your throat to implant an embryo, you can look like you have a Xenomorph bursting through your chest simply by wearing this Alien shirt. This shirt is designed after the now famous scene from the sci-fi thriller Alien where a creature came bursting through the chest of Executive Officer Gilbert Kane. This shirt is sublimated, making the image exceptionally clear and disturbing. This shirt is also soft and comfortable, even though it looks extremely painful. If you want everyone to know that you are a fan of Alien, and that they are about to be stalked by a Xenomorph, this Alien sublimation shirt is a must have. 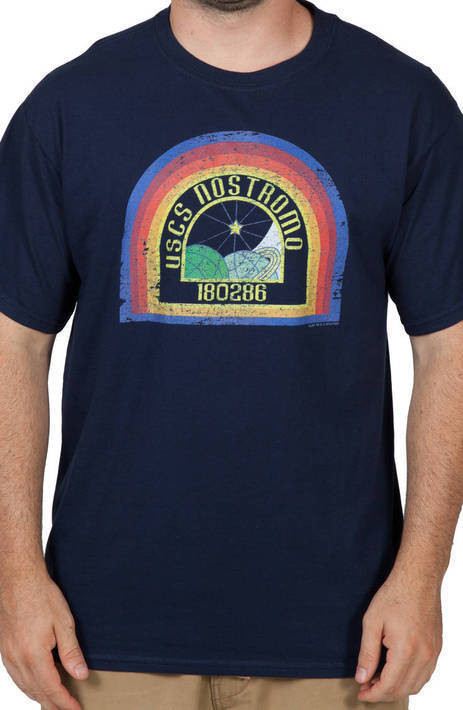 This Alien shirt shows the logo for the spacecraft named Nostromo. The spacecraft was registered to the Weyland-Yutani Corporation in the year 2122. Weyland-Yutani sent Nostromo on a mission to detect mysterious signals. Unbeknownst to the crew of the spacecraft, they were to return with a Xenomorph specimen…all other priorities rescinded. One by one, the crew was eliminated by the fierce alien life form. For any fan of the sci-fi thriller Alien, this Nostromo shirt is a must have. 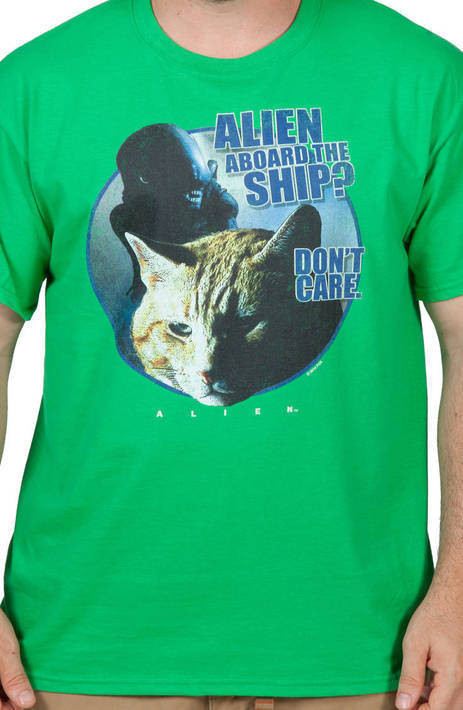 In the 1979 sci-fi thriller Alien, Jones was the name of Ripley’s cat aboard the spaceship Nostromo. While the crew of the spaceship was being decimated by an angry alien creature, Jones wandered off on his own to relax. Why? Because Jones don’t care. This Alien shirt shows an image of both the creature and Jones. The shirt reads Alien Aboard The Ship? Don’t Care. In a chilling movie, one of the biggest jumps comes from Jones when he jumped out at Ripley. Jones did care about scaring the hell out of the Alien audience. If you are a fan of the movie Alien, or more specifically Jones, this Don’t Care shirt is a must have. 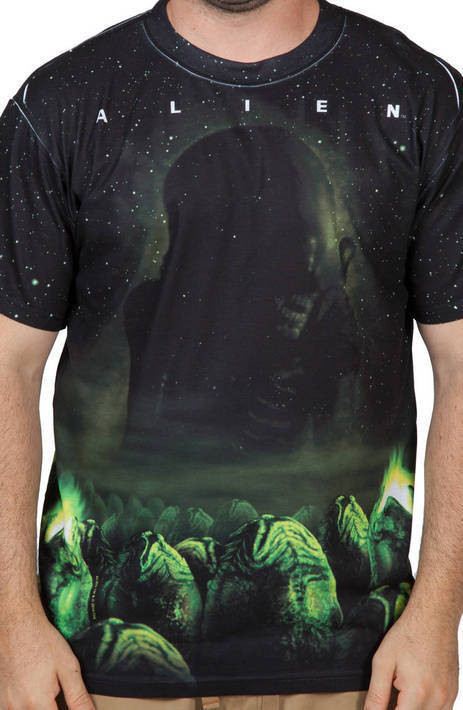 This Alien shirt shows eggs hatching on a distant planetoid. Above the eggs is the chest bursting Xenomorph that we have all grown to know and fear. This shirt is sublimated, which makes the image clear and the feel very soft. This unique shirt is printed with images from the movie Alien on both the front and the back. If you are a fan of Alien and want everyone to know that they should fear the queen of all monsters, this sublimation shirt is perfect for you. This Alien shirt shows a recently hatched Xenomorph parasitoid. This squid-like creature’s sole purpose is to implant a Chestburster embryo in a host. It does this by clamping onto a host’s face, then it releases the embryo into the host’s mouth. Because of this, this creature has earned the nickname Facehugger. Here, the Facehugger appears ready to embrace, and the shirt reads I Need A Hug. A nice sentiment, but this creature will set into motion a series of unpleasant events. Still, if you are a fan of the movie Alien, or if you could just use a hug, this Facehugger shirt is the perfect shirt for you. 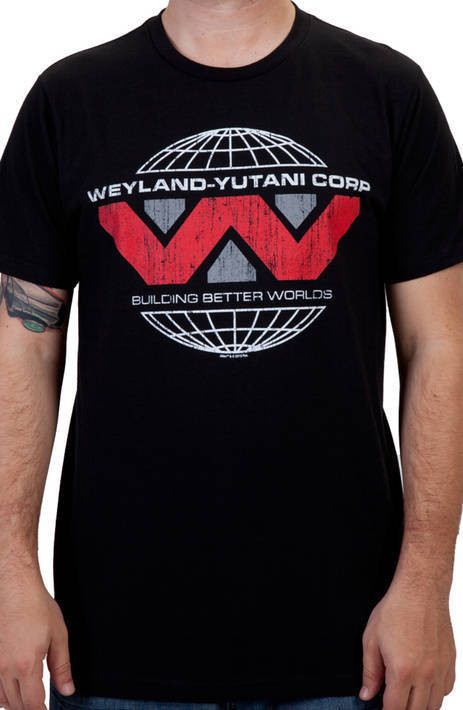 This Alien shirt shows the logo for Weyland-Yutani Corp. and their tagline, “Building Better Worlds”. The Weyland-Yutani Corporation sent the spaceship Nostromo to retrieve extraterrestrial life forms. This shirt is perfect for any fan of the Alien franchise. 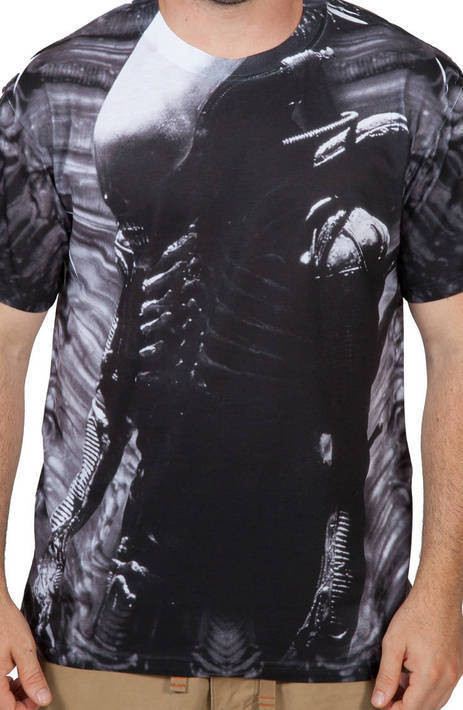 This Alien shirt shows a Xenomorph creature, fully grown on the front and the movie’s poster artwork on the back of the shirt. This shirt is sublimated, which makes the image clear and the feel very soft. In the sci-fi thriller Alien, a squid-like creature attached itself to a host and plants an embryo in him. When the host is a human, the result is the seven-foot, double jawed killing machine seen on this shirt. When you wear this shirt, you will be reminding everyone the Xenomorph is a perfect organism, unclouded by conscience. If you are a fan of Alien, this sublimation shirt is a must have. The 1979 film Alien has one of the most well-known taglines in cinematic history. It’s right up there with “It Takes All Kinds Of Critters To Make Farmer Vincent’s Fritters”. This Alien shirt shows a shadow of the creature from the sci-fi thriller along with the tagline “In Space No One Can Hear You Scream”. For any fan of the historic and memorable movie Alien, this is the shirt for you. This Alien shirt shows a Xenomorph, the creature that terrorizes the crew of Nostromo in the 1979 sci-fi classic. The terrifying look of this acid-spewing creature earned Alien an Academy Award for Visual Effects. This shirt is perfect for any fan of the Alien franchise. This Alien shirt shows a face hugging, squid-like creature removing itself from Executive Officer Kane’s face. The creature attached itself to Kane’s face on an abandoned spacecraft. After the Nostromo crew unsuccessfully tried to surgically remove the creature, it released itself, as seen on this Alien shirt. Everyone that sees you in this shirt will either scream in fear or cheer with excitement. Either way, they will know that you are a fan of Alien. 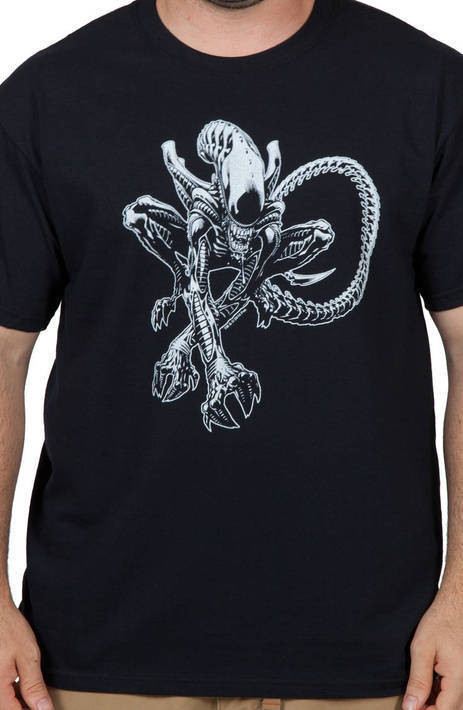 This Alien shirt shows a fully grown Xenomorph, positioned and ready to attack. This creature found its way onto the spacecraft known as Nostromo. Once on board, this alien creature unleashed horror on the Nostromo crewmembers in ways unimagined before. From chest bursting to attacking in the shadows, this creature helped to make Alien one of the greatest sci-fi thrillers of all time. If you are a fan of Alien, this Morphed shirt is a must have. This Alien shirts shows the spacecraft Nostromo approaching planetoid LV-426. The crew of Nostromo were tracking a mysterious signal that lead them to the planetoid. Once they landed, all hell broke loose. Kane had a creature attached to his face, another creature burst out of his chest, and one by one, the crew was eliminated by an acid-drooling alien creature. The image on this shirt is the beginning of the end for the crew of Nostromo. This shirt is sublimated, which allows the image to be very clear and the feel the be very soft. If you are a fan of the sci-fi thriller Alien, this is the perfect shirt for you. 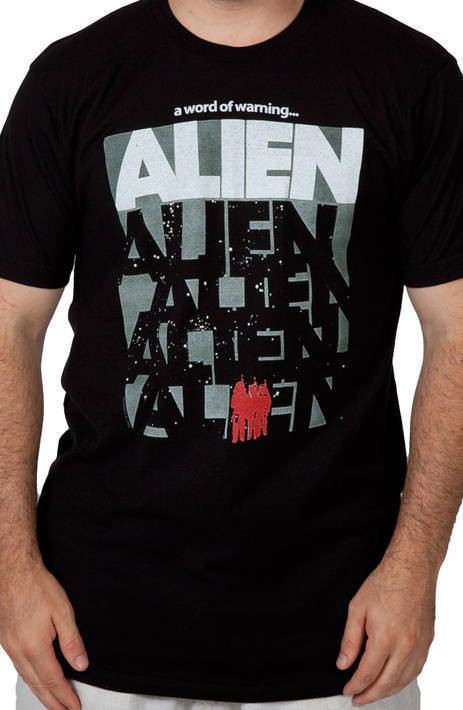 This Alien shirt shows three Nostromo crewmembers with the tagline “a word of warning…” above them. One of the taglines for the 1979 hit movie was A Word of Warning…. Be Prepared for the Year’s Most Terrifying Movie. With face-clamping, gut-busting, acid bleeding creatures, it’s easy to see why this sci-fi thriller was so terrifying. Get your Word Of Warning Alien shirt now. All other considerations secondary. This Alien shirt shows an image of the dreaded M41A Pulse Rifle and the popular quote, Peace Through Superior Fire Power. Both the Pulse Rifle and the quote were introduced in the 1986 sci-fi movie Aliens. When facing off against a Xenomorph, a Pulse Rifle should always be your weapon of choice. Let everyone know that you are a fan of the Alien franchise with this Superior Fire Power shirt. Fortunately not made of 20,000,000 tons of Mineral Ore, this comfortable shirt will bring you nothing but comfort. This Alien shirt shows a Face Hugger about to attach itself to someone’s cranium, much like it did to Kane in the epic 1979 sci-fi thriller. While this shirt may not stop a creature from erupting through your stomach, it will let everyone know that you are a fan of Alien. Anyone who sees you in this shirt has our sympathies. This Alien shirt shows the three stages of evolution for the movie’s frightening alien creature. In the first stage, an egg is hatched releasing a squid looking alien that will clamp onto a host’s face. In the second stage, a small, screaming alien will burst through the host’s thoracic area, leaving behind a bloody mess. In the third stage, the alien evolves into a full grown, acid drooling Xenomorph. If you are a fan of Alien and want to clue everyone in on the stages of it’s famous creature, this Alien Evolution shirt is perfect for you. Alien Movie Poster T-Shirt Sheer – Remember the original horror sensation that started it all when you wear this cool Alien t shirt! The Alien Movie Poster T-Shirt Sheer is black with a slim fit and a soft feel. The front features a movie poster for Alien, released in 1979, that has the title logo and the words “In space no one can hear you scream.”