Check out our discoveries of the most awesome Doctor Who T-Shirts below. We simply find and round up all Doctor Who T-Shirts scattered around the Internet that we think are cool so that you don't have to. If you find these Doctor Who T-Shirts really cool, do not hesitate to share with your friends.
* The list below contains affiliate links, which means if you make a purchase after clicking on a link below we may earn a small commission at no extra cost to you.
1 Doctor Who Daleks Tardis Police Box Toddler Navy T-Shirt 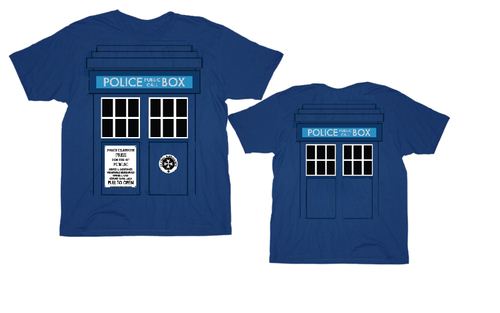 Is your young one a Whovian in the making? If so, why not help them to show it off with pride? This officially licensed Doctor Who t-shirt features the Doctor’s preferred method of travel, the TARDIS! It’s the perfect way to travel through time and space, especially for your wibbly, wobbly toddlers. Let your child show off their love for Doctor Who with this cute and geeky TARDIS t-shirt. Just be careful and make sure that the Daleks don’t get them! 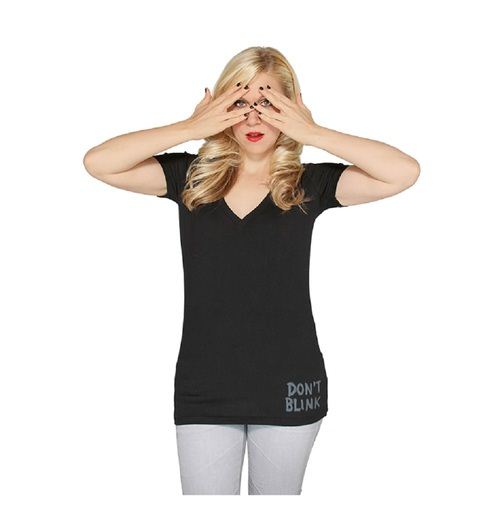 Are you trying to avoid the Weeping Angels? If so, you’ll have to remember not to blink! After all, that’s when they get you! Fans of the long running BBC series Doctor Who will know all about these guys, making this officially licensed Doctor Who t-shirt the perfect choice for any long time viewer. Let the world know how to avoid some of the nastiest Angels in the universe with the help of this awesome Dr. Who t-shirt. Featuring stone wings on the back and some sage advice on the front, this Weeping Angel t-shirt is a great way to show some love for your favorite science fiction franchise!

Buy it on tvstoreonline.com
$24.00
3 Doctor Who Exterminate Black T-shirt 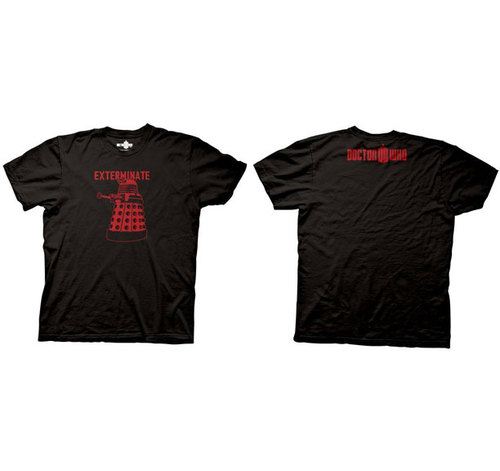 Do you exhibit little emotion other than hatred and anger? Are you obsessed with your own superiority? Then it may be time to consider the possibility that you’re actually a Dalek! Embrace your inner cybernetic mutant with this “Doctor Who” t-shirt featuring the Time Lord’s greatest foe alongside its legendary war cry: “Exterminate!”

Buy it on tvstoreonline.com
$17.95
4 Doctor Who Glowing Angels Have The Phone Box Black Mens T-shirt 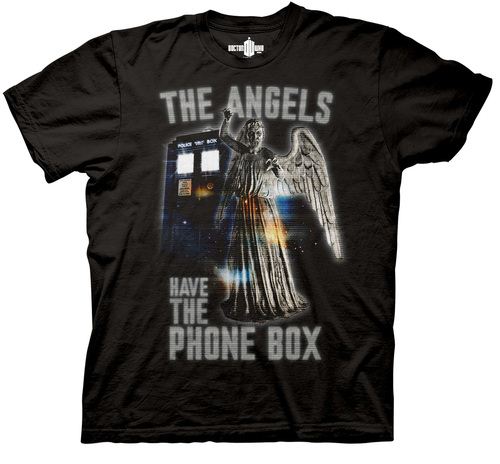 This is not good news. If the Angels have the phonebox, they could feast off of it for years! True Dr. Who fans know the significance of this quote, and this officially licensed t-shirt was made just for the fans. If you’re one of the hardcore fans, let the world know with this awesome shirt.

Buy it on tvstoreonline.com
$17.95
5 Doctor Who I Double Heart Dr. Who Adult Black T-Shirt 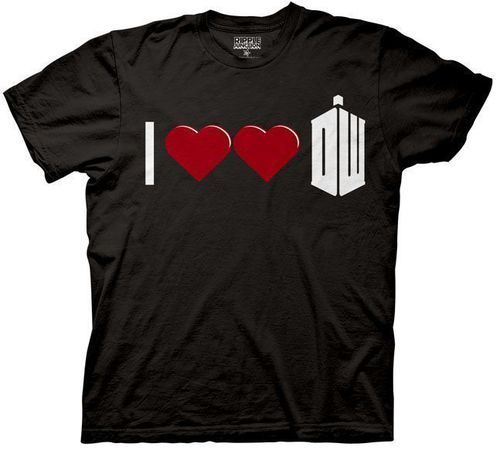 Are you a true Whovian? If so, then you probably know that the good Doctor has two hearts! If you love Dr. Who with both of his hearts, why not show it off in a fun and humorous way? This officially licensed Doctor Who t-shirt is the perfect choice for any fan of this unforgettable science fiction show. There’s a reason that this is the longest running sci-fi show of all time! Let the world know what they’re missing out on with this cool Dr. Who t-shirt.

Buy it on tvstoreonline.com
$18.95
6 Doctor Who I Double Heart Dr. Who Juniors Black T-Shirt 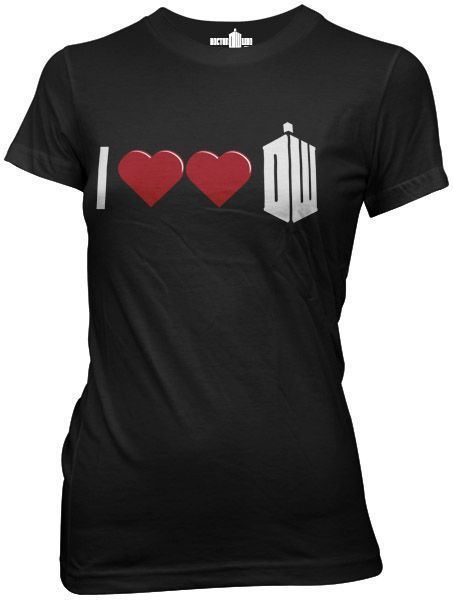 If you’re a true Whovian, chances are that you’ll get the joke on display here. You see, the Doctor actually has two hearts! If you love this unforgettable sci-fi character, why not share that love with the world? Show some real love for him with this officially licensed Doctor Who t-shirt! Let the world know why this is the longest running science fiction television show of all time with this awesome Dr. Who t-shirt!

Buy it on tvstoreonline.com
$18.95
7 Doctor Who I Heart (Tardis) DW White Juniors T-shirt 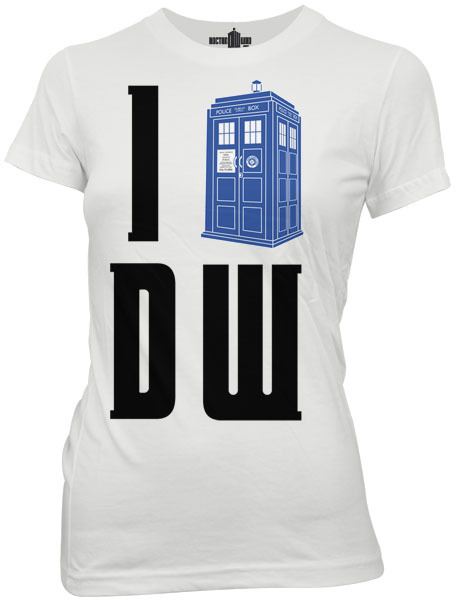 Do you love Doctor Who? Sure, but do you Tardis Doctor Who? If so, this cute little shirt is probably the perfect fit for you! Show off your love for Doctor Who in style with this officially licensed t-shirt.

Buy it on tvstoreonline.com
$17.95
8 Doctor Who Inside of TARDIS Adult Sublimation T-Shirt

Have you ever wondered what it would be like to travel throughout space and time? Well, the Doctor is pretty familiar with the concept thanks to his Tardis! If you’re a fan of the hit science fiction series Doctor Who, why not show it off in style? This officially licensed Doctor Who t-shirt looks just like the inside of a Tardis, making it an excellent choice for any die hard fan. If you’ve got a jacket that looks like the outside of a police box, pair it with this Tardis t-shirt to make magic happen! The dye sublimation printing process creates slight imperfections that are unique to and a part of each garment. Each tee is unique. 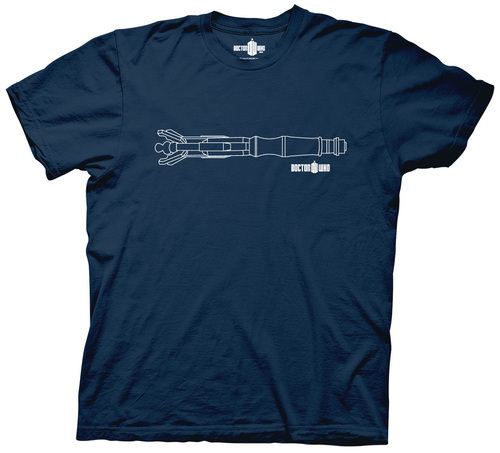 Buy it on tvstoreonline.com
$17.95
10 Comic Doctor Who Shirt This Doctor Who shirt shows a comic book-style look at some popular scenes from the long running BBC series. Shown on this shirt are a gargoyle chap with wings from the planet Dæmos, a Dalek with its catchphrase “Exterminate”, the police box TARDIS, and Cyberman. Fans of Doctor Who will love seeing you in this shirt. Tell anyone who isn’t a fan, “You Will Become Like Us”. 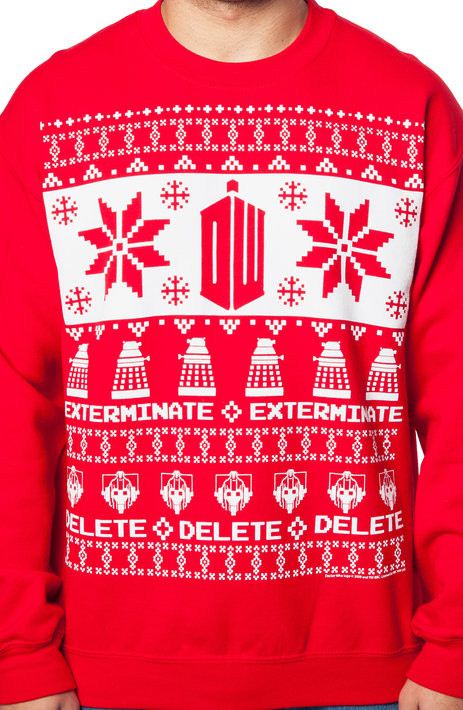 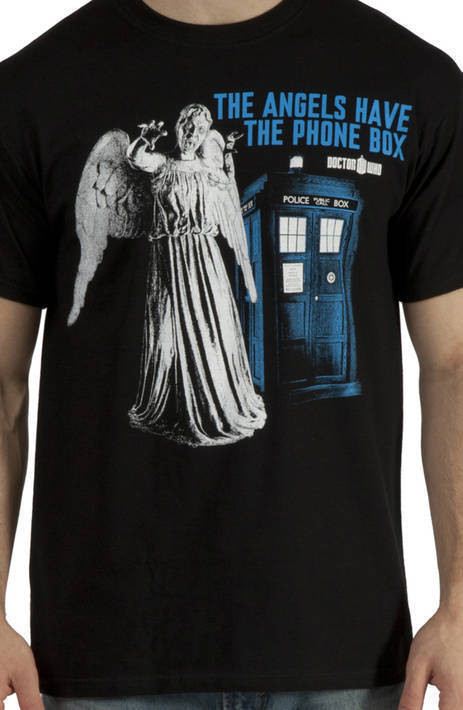 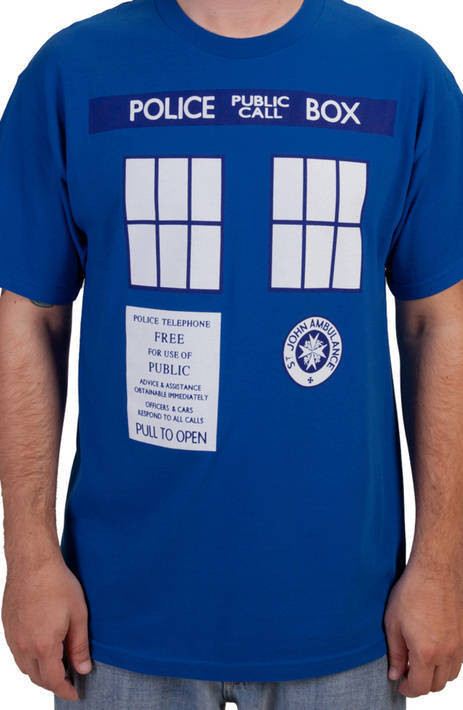 With this Dr. Who shirt, you can turn your torso into the time traveling police box, TARDIS. You may even look like a piece of Trompe-l’œil art coming out of the spacecraft. You will turn many heads, even those that are not aware of the Eye of Harmony. With a TARDIS time machine in the background, Dr. Who’s famous Wibbly Wobbly Timey Wimey words are seen on this ladies shirt. In an episode titled “Blink”, Dr. Who said that time is like a big ball of wibbly wobbly timey wimey stuff. Since then, those words have appeared in many different forms…even on t-shirts. In an episode titled “Blink”, Dr. Who mentioned that time is like a big ball of wibbly wobbly timey wimey stuff. That quote has taken on a life of its own with fans of the iconic British television show. It is seen here with a TARDIS time machine in the background.

Buy it on 80stees.com
$20.00
16 Doctor Who Christmas Stockings Sweatshirt In his many incarnations in space and time, Doctor Who has appeared in different wardrobes, sometimes in a bow tie and sometimes in a vest and necktie. No matter how the Doctor was dressed, he was always recognizable to the Doctor Who fans. Now, you can show that you are a fan of the Time Lord this holiday season with this Doctor Who Christmas Stockings sweatshirt. The sweatshirt shows three stockings, one with a bow time and suspenders, one that looks like the TARDIS, and one that is dressed in a jacket, vest and necktie. Everyone that sees you in this Doctor Who Christmas Stockings sweatshirt will trade in their Ho Ho Ho for Who Who Who. This Doctor Who shirt features a watercolor painting of the Doctor’s TARDIS. A TARDIS is a TT Capsule used by the Time Lords to transport to any point in time and any place in the universe. The Doctor’s TARDIS is disguised as a London police box. This has become one of the most instantly recognizable images to fans of Doctor Who. Now, you can show your love for Doctor Who with this watercolor TARDIS shirt. This ladies Doctor Who shirt features an image of Matt Smith as the 11th Doctor. Over the course of almost four years, this Doctor appeared in three series and seven specials. The Eleventh Doctor consistently ranks high on lists of fans’ favorite Doctors. If Matt Smith portrayed your favorite Doctor, this ladies 11th Doctor Who shirt is a must have. This ladies Doctor Who shirt features iconic images from the television series, all on festive Christmas stockings. The images include the Doctor’s bow tie and suspenders, the TARDIS time machine, and the Doctor’s necktie and vest. For any fan of Doctor Who, this Doctor Who Christmas shirt is a must have during the holiday season. The popular Time Lord Doctor Who has a very real threat in the form of cyborgs known as Daleks. The Daleks are angry and dangerous, but this holiday season, the Daleks will bring a smile to everyone that sees you in this Doctor Who Dalek Christmas t-shirt. This t-shirt features the Doctor Who logo surrounded by snowflakes. The t-shirt also shows Daleks and their iconic catchphrases, Exterminate and Delete. For any fan of Doctor Who, this Dalek Christmas t-shirt is a must have. When the Daleks tells you to do something, it’s probably a pretty good idea to listen to them. These evil robots don’t mess around! If you’re a fan of the much beloved science fiction series Doctor Who, show it off in style with this awesome Dalek t-shirt! Featuring a Dalek at the top, this officially licensed Doctor Who t-shirt pokes fun at the ‘Keep Calm and Carry On’ motivational poster, making it an excellent choice for any die hard Whovian!

Buy it on tvstoreonline.com
$18.95
26 Doctor Who All Doctors and Tardis Collage Adult Black T-Shirt Which doctor is your favorite? Well, it doesn’t really matter, does it? I mean, all of the doctors are pretty damn cool! Whether you’re a fan of the original or a newer breed, this officially licensed Dr Who t-shirt features everyone’s favorite intergalactic time traveler. Featuring an awesome collage of all of them, this cool Doctor Who t-shirt is sure to please any die hard fan of the long running sci-fi show. No matter who your favorite Doctor is, you should be able to point out his unforgettable garb on this officially licensed Doctor Who t-shirt! Featuring the clothing choices of all eleven doctors and their chosen method of transportation, this Dr Who t-shirt is perfect for any Whovian. Let the world know that you’re a fan of both old and new Who with this fun and interesting BBC t-shirt featuring the TARDIS!

Buy it on tvstoreonline.com
$18.95
28 Knock Knock Doctor Who Shirt This Doctor Who shirt illustrates a knock-knock joke that takes place at the door of the good Doctor’s TARDIS. Even though this is an amusing joke on its own, you might need a Type 40, Mark 1 TARDIS for a humorous visual. If you are a fan of Doctor Who, this is the perfect shirt for you. You’ll have others laughing harder at this shirt than at some of the Doctor’s whimsical comments. No matter what time dimension you are in, Christmas is the happiest time of the year. To further prove this point, this Doctor Who shirt features the good doctor’s TARDIS dressed up as a Ginger Bread Time Machine. The doctor’s TARDIS has always been unpredictable, but one thing that is for certain is that everyone will love seeing you in this Doctor Who shirt. This Christmas TARDIS t-shirt is perfect for any fan of Doctor Who during the holiday season. Some people take bananas to parties. You can take this Christmas TARDIS t-shirt.